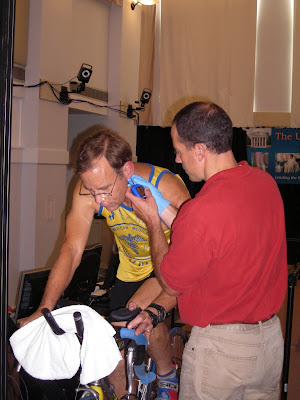 Testing an athlete’s serum lactate
levels while pedaling under a controlled load and controlled conditions is one
way to determine the lactate threshold and from that one’s training zones. If
this athlete takes a blood thinner, would testing of this sort put him
or (and possibly as important in these litigious times) the
test director in jeopardy?

I fail to be surprised each
time I see/hear about another athlete who’s taking blood thinner medication for
a recent, and some cases not so recent clot. There are frequent reports in a
number of the on line Tri forums and I thought a review would be beneficial.

A pulmonary embolism or clot in the lung (sometimes air or fat, etc.)
can be fatal! A person with an acute PE can complain of chest
pain, often worse with deep breathing, the onset of a cough which may contain
blood tinged sputum and they can breathe more rapidly. They may note both a
shortness of breath and more rapid heart rate. This is obviously an emergency –
go to the hospital – and treatment will be initiated to prevent new clots from
forming, start oxygen, and occasionally clot busting meds will be given. A
frequent source of clot can be the legs, say there’s been a long airline flight
(like to Kona), long car ride, etc. Other risk factors include birth control
pills, positive family history, recent orthopedic surgery, cancer, etc.
Prevention would obviously be the best choice as once diagnosed, there will
likely be a 3 – 6 month period where blood thinners are taken on a daily basis
and the blood is drawn at regular intervals to make sure the medication is
working correctly. It’s called Coumadin and is the active ingredient in rat
poison believe it or not.

To prevent a PE, when you are on a long
drive/flight get up and move around frequently, move your legs. Bed ridden
patients in the hospital can be fit with devices that squeeze the foot or calf
to keep the blood moving and prevent pooling.

Triathletes ask about
racing and training while taking Coumadin understanding that they are at
increased risk for bruising, bleeding -both external and internal – and that any
cut or abrasion on the skin will bleed more. Once the Coumadin dosage has
leveled off and the medical team feel the clot stabilized, then a return to
training can be considered. I don’t think anyone would take issue with swimming
or strength training, and probably not running if the return to the roads is
done slowly and carefully. Biking, where the potential for a crash (read injury)
is higher, gives us the biggest worry. All of us have crashed at one point or
another and in one of my previous blogs I reported being momentarily unconscious
after my helmet contacted the asphalt unexpectedly. I am very glad I wasn’t
Coumadinized when that happened because of the risk of bleeding into my head and
permanent damage. I believe I’d be inclined to ride the stationery bike watching
old TdF videos for quite some time.

Lastly, the question of eating green,
leafy vegetables comes up as they have plenty of vitamin K and vitamin K
reverses the blood thinning action. Most people would agree that if your diet is
constant, eating about the same amount of greens daily, that you should be ok
and it’s those patients who have a big salad one day (the day prior to their
blood test could be a problem) but chili cheese dogs on the the other days. Keep
it even.

In short, prevent those leg clots by moving around on long trips
and, if for any reason you think you might have a PE, get to the hospital
pronto, it’s the best course for you.