What is the Value of an Experienced Bike Fit? It’s Invaluable! 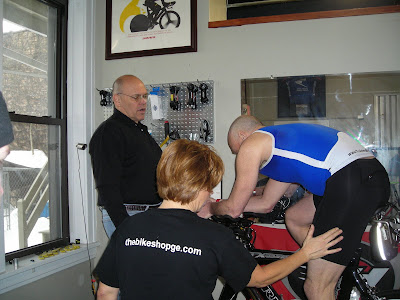 John Cobb counsels a novice triathlete at Glen Ellyn, IL bike fit.
As a surgeon, I think I learned as much from doing my 1,000th, or 10,000th knee arthroscopy as I did from my 100th. When you do something over and over and over again your learning never stops. Bike fitting is no different.
I would speculate that many of you have had a professional bike fit…or two…or three…or…? Personally, I had a noted east coast coach fit me ten years ago. About 4 years later flew with my bike to the west coast to be evaluated with the IR cameras by “the pros.” These two fits were quite different from each other. Lots of computers, measurements, images, etc. during the second fit. But, I was never really comfortable, faster maybe, more aerodynamic maybe, but not more comfortable, particularly the seat. (I even had xrays taken of my pelvis.)
That is, until I met John Cobb…who just talked to me. And then we talked some more, before coming anywhere near the bike. It was very similar to the doctor patient interaction where, if the doctor actually listens to the patient, something I must admit that I don’t always do as well as I should, the patient will tell you the diagnosis.

We then spent the better part of an hour, first taking the rear end apart and putting it back together. Then the same with the bars and front end, changing bit by bit, until I was simply pedalling for 15-20 minutes talking about the old days of triathlon with John…and I realized it didn’t hurt. Hallelujah! My time was worth the 750 mile drive.

I know that we haven’t reached the end point yet but it’s nice to have a road map for the future. The take home point here is that our sport is many things to many people but foremost it should be enjoyable. We don’t all need to do the Ironman or Race Across America, but if we enjoy the time we do spend training and racing, we’ll benefit from it in ways we have yet to imagine. 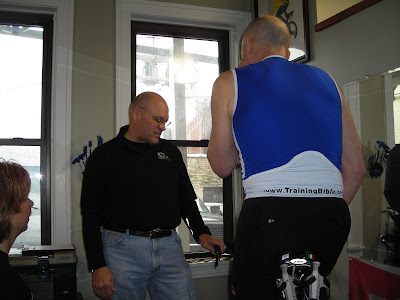