Here’s your Fearless Leader, Ben Greenfield, as he fits right in at the Kona Underpants Run this year.  Pretty sharp outfit there Ben, we can’t wait to see what 2012 looks like. 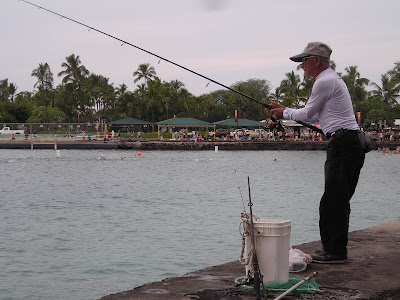 Not everyone who comes to Kailua Bay
during Ironman race week wears a Speedo!

“I’d take any risk to tie back the hands of time.” Styx

I didn’t race
at IMH this year…and likely my body’s been sending messages loud and clear
that I’m done with iron distance racing. But on Sunday morning after the event,
I went for a bike ride and was astonished to see a couple runners. Pushing it!
At first I thought they were tourista like me but as I approached, I could see
that they both had Ironman wrist bands on and a race day sunburn on their neck
and shoulders from an especially hot day yesterday for the race. (There’s almost
no shade on the Big Island bike route. Maybe one could ride in the shade of an
overflying seagull…but that would present it’s own potential
hazard!)

Running? The day after IMH? What were they thinking? Were they
thinking? Maybe getting a jump start on training for their next iron distance
race…next weekend. Or, maybe they’re just not able to turn it
off.

Racing and training at this level causes significant breakdown
of bodily systems that need recuperation time be it from training or racing.
Although there are a select few who can get by with less…and these are the
ones we hear about in the press…most of have neither a red cape nor an “S” on
our chests. And Kryptonite doesn’t bother us one bit.

Why not take the
first several days after a race to let the soreness fade, blisters, if present
resolve, and only then begin a few low effort, short workouts focusing on form
and style, not quantity. Many would suggest that it be a full 10-14 days before
getting back into full training after a 140.6 effort, assuming you already have
a race scheduled. That time would be well spent on family activities, reading
(no, not about triathlon), maybe even go see the new Michael Jackson movie for
something completely different. Or, if you’re a guy, take your spouse to a chick
flick like “The Kings Speech.” I took my wife. And I liked it. Maybe it’s time to
simply be a husband and father/mother and wife, and not an athlete. Although no
one would fault you for drifting into thoughts about HED wheels during the
credits.