What is a good time for my age? is one of the most common questions we are asked at Swim Smooth and, to be honest, it’s a question we find uncomfortable to answer. That’s because it’s a bit of a loaded question.

L-R: Suzi, Barry, Brian, John, Emmie
One of the most important duties of a coach (of any type) is to help remove barriers from someone’s progress and absolutely never introduce new barriers that were not there to begin with. Normally a swimmer asking this question is looking for an easily achievable target, perhaps one slightly quicker than their current speed, that they can achieve and be happy with. On the face of it this may seem virtuous but such an answer creates a very self limiting mental state that can stay with the swimmer forever: I can’t be any better because of my age.

END_OF_DOCUMENT_TOKEN_TO_BE_REPLACED

What do all these stroke flaws have in common? :

If you said “breathing”, then you’re correct. In fact most stroke flaws happen during or immediately following breathing because you’re simply thinking “give me that air!” and not focusing on the rest of your stroke.

Breathing is such a distraction and interruption to the freestyle stroke that it even disrupts an elite swimmer’s rhythm and efficiency. This is why 50m sprinters minimise the number of breaths they take – often only taking one or two during their 50m dash. As distance swimmers we have to breathe much more often than once or twice per lap but this highlights the significant challenge to our stroke technique when breathing.

What can we do to minimise this problem? Firstly, try and avoid always breathing to the same side every two strokes. If you do this then some very critical areas of your stroke never get any of your attention and are very likely to be major weak points in your technique. For instance, if you breathe only to your right every two strokes then your left hand catch never gets any attention because you’re always breathing simultaneously with it. Such a swimmer will tend to develop bad habits on that side, such as pressing down on the water or dropping their elbow, greatly harming their speed and efficiency in the water.

Switching to breathing every three strokes (bilateral breathing) greatly helps you because two out of three left arm strokes are now non-breathing strokes and can get your full attention. When it comes to the one in three that are during a breath, your stroke will stand a very good chance of holding together nicely: 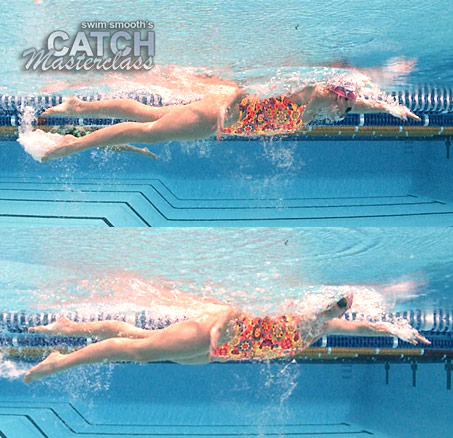 Breathing every three strokes is about the right interval for most swimmers when they’ve developed good exhalation into the water. Very tall swimmers who’ve tried to overly lengthen their stroke may find bilateral breathing a challenge because their stroke rate is simply too slow and the time between breaths too long. Conversely, shorter swimmers with naturally faster stroke rates often settle happily into a pattern of breathing every five strokes.

If you have worked on your exhalation into the water and still find bilateral breathing hard then consider your body roll at this point of the stroke. If you’re flat in the water to your non-dominant side then that will make breathing very challenging. Think about extending and rotating to this off-side and breathing to it will start to feel much easier.

Coaches: have you noticed that a swimmer’s breathing technique often looks much better to the non-dominant side? This is because bad habits such as lifting or over-rotating the head have never developed on that side. If you see this with a swimmer then feed that back to them to give them encouragement to get over the ‘bilateral hump’, which normally lasts about 6 sessions.

Next week on the blog we’re going to look at tactical situations in races when breathing to one side is advantageous, explaining why we see many elite swimmers breathing just to one side on TV.

When you head to the pool for a swim workout, do you ever wonder what you should be doing? Many athletes tend to think they only need to jump in the pool, swim a certain distance, do some fast speed work and then hurry on with the rest of their day. This is not the best way to train, but not everyone can afford a personal coach to give them specific workouts to meet their goals and time demands. I have put together a great pre/during/post swim guideline below to help you make the most out of your workout.