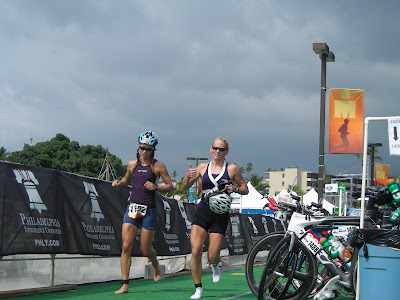 “What we have here is a failure to communicate.” Cool Hand Luke

Last month I published a piece entitled “What a Triathlete Needs to Know About Antibiotics” that was well received. (Thanks) The impetus of that post was a series of confusing ST threads concerning the potential side effects of certain antibiotics, especially fluoroquinolones (Levaquin, Cipro, Avelox, etc.) It was intended to clear up misconceptions as to the relative frequency of these side effects, most noteworthy rupture of the Achilles tendon. (Note: at a Primary Care review course I taught in Florida this week to > 200 physicians, when asked, only 2 docs admitted to personally experiencing this complication in their practice.)

The Achilles tendon is the strongest, thickest tendon in the body connecting the soleus and gastrocnemius to the heel. Men in their 30’s and 40’s seem to have the highest rupture rate, particularly those who are active in sports, especially the weekend warrior who’s relatively sedentary during the work week but really goes at on Saturday . Many in medicine feel that it’s a previously abnormal tendon that ruptures. Although it can fail both at the mid calf level, the junction between the muscle and tendon, or closer to the insertion in the heel, the latter is more common. The tear itself is usually ragged and irregular and not so easy to repair. The diagnosis is made on physical exam by palpating a space where the Achilles normally resides and a positive Thompson test, squeezing of the calf of the prone patient noting whether or not the ankle flexes. In a failed tendon, the ankle will not flex. Most often, there is little or no warning that the tendon will yield.

When diagnosed acutely, options include operative or non-operative treatment, most often the younger population choosing surgery. This could be either a traditional open operation or a per cutaneous procedure. That said, there is an increased risk of complication (infection, adhesions, etc.) over those who’ve chosen the non-surgical route but a lower incidence of re-rupture. Following the operation, most patients will be placed in a cast or splint short term followed by a functional brace. Return to sport varies depending on the solidity of the repair, post-op pain, and ability to prevent re-injury.

Since our goal is to prevent injury in the first place, correction of limb length inequality, arch problems, bio mechanical issues, etc. all help in attaining this. Although there is some controversy, lightly warming up, stretching – both straight legged and bent kneed – perhaps even with a little light massage, coupled with a general fitness program seems to be our best protection in keeping the surgeon at bay. 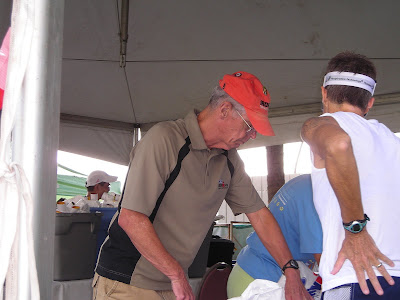 Quick Note: with the arrival of warmer temps and daylight savings time, many of us are out on the roads earlier, later and longer. Of the four strobe lights on biker’s butts on this Sunday’s ride, all four needed new batteries. One was so bad you could hardly see it in the pre-dawn darkness…drafting! So, before you ride again, change all those batteries and be safe.

www.johnpostmdsblog.blogspot.com
Notes From A Pregnant Athlete