Are You Ready For The Unexpected 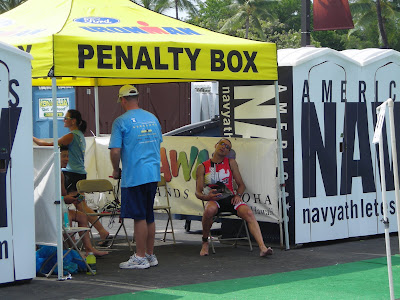 Do you think, when this athlete was topping off the air in his tires his morning, that he thought, “You know, I’m sure glad I’m the the type of racer who never gets penalized…” I wonder if he was prepared for this.

Sunday They carried a man off the race course on a stretcher. I heard that he just collapsed on the run; maybe it was the heat – a low of 80 degrees last night. And the sun came up well before the first athlete was body marked or the transition area opened to further push the mercury toward inferno status… from a racing point of view anyway. You know, one of those days when the heat simply blasts you when it radiates off the asphalt. It’s a good thing most of were wearing hats and could put ice in them at the aid stations. As we watched them load him into the ambulance, we hoped it wasn’t something serious.

Plan “B.” Everyone needs one. You arrive at the race course and – SURPRISE – no wetsuits for the swim (like happened to us today.) Or – SURPRISE – the expected temperature is 15 -20 degrees higher than where you live and train. This happened at the Boston Marathon a few years ago where runners were just finishing a winter of snow running and an unexpected heat wave brought temps in to the mid 80’s. They were dropping like flies. There were so many people with heat related problems that the enormous armory-like building they use at the finish line with cots as far as you can see, was simply overflowing with “bodies.”
All too often, racers just plow ahead “business as usual,” and if they’re lucky, only have a poor performance. They wonder why, despite ample beverage at the post-race party and more on the way home, they still don’t pee for hours. There’s a take home lesson here.
There can be course changes, weather curve balls, rightly or wrongly you get penalized, alterations to the order of events, unintentionally getting kicked in the stomach, or face –hard- on the swim just to name a few things that cause us to re-evaluate our original race plan. How about a flat tire? But, if we’re to survive and do our best on that particular day, flexible we must be. Despite one’s physical suffering, always try to remind yourself that everyone has the same course to ride and run on and just maybe you can do it just a little better than they do. In the immortal words of that famous rock group of the 60’s, Pacific Gas and Electric, “Are You Ready?”
Be prepared (the Boy Scouts were right)
Be flexible
Know when you’ve reached your limit and it’s time for Plan “B” 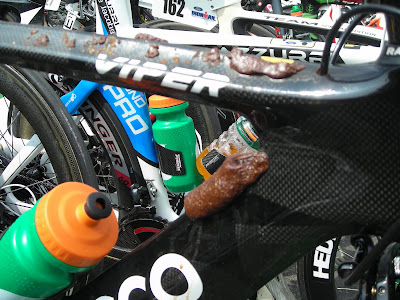