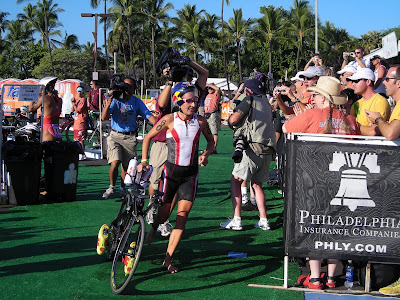 Natascha Badmann, 6 time winner of Ironman Hawaii, seen here
exiting T1 minutes before a bike crash on the Queen “K” that
would not only take her out of the race but give her training and
racing problems for the next year and more, potentially a career
ending injury.”


Recently, there’s been a three part article in the
local paper about Matt Miller, former swimmer on the UVA team who gave

it up for triathlon. While training on the Blue Ridge Parkway in November ’09, he
lost control of his bike and slammed into the front of an MG. By a stroke of
incredible luck, the car behind the MG was driven by another doc from my
hospital, an anesthesiolgist as chance would have it. Matt had broken his jaw
in two places, along with every bone in his face, and was drowning in his
own blood, until quick action by the doctor opened his airway allowing him to
breathe. When taken to the trauma center, his family was told he wouldn’t
survive. But survive he did with multiple operations, titanium plates on his
broken facial bones, a breathing tube in his neck, etc. Surprisingly, he suffered
no other major injuries.

His old college coach got him back in the pool recently where
he was able to crank out a “pedestrian” 59 second 100! And although he still
looks forward to several more operations to put his face back together, he
managed a top ten finish in a Philadelphia time trial. Go Matt!!

We take from this that it can happen to anyone…including you and me.

So, when you leave home on that solo ride, tell someone where you’re going,
approximately what time you’ll be back and if you have a cell phone, take it with
you and turn it on. (I’m quite guilty of having my cell phone with me but always
off.

Consider getting a Road ID. This inexpensive ankle strap yields
basic identification, emergency contact phone numbers, etc. and mine has my
allergy status, medications and my blood type (a good thing for the ER doc if
you plant your face into the grill of a classic car. And lastly, anytime there’s
a close call with a car, try to figure out how you can avoid that next time.
The car usually wins! Safe biking to you all and pass this
along.