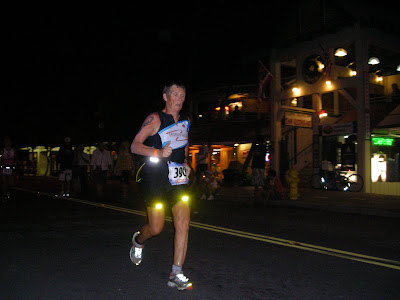 “Outside of a dog, a book is man’s best friend. Inside a dog, it’s too dark to read.”Groucho Marx
While donning my running shoes by my Jeeps interior lighting one recent morning I realized we only have 12 hours of daylight this time of year and it’s decreasing steadily. Since work takes up 8 of them, some of our training must be done in the dark. I have a friend who used start his training
day at 0230! Yes, he’s a mite intense. He’d get a majority of his training done in the dark.

You need to go the extra mile to absolutely ensure your safety-especially from motor vehicles. While running, attention to a possibly slippery road surface, choice of routes, bright clothing, reflector vests, even a red strobe light on your butt while always paying attention to your surroundings.

When cycling, riding single file is even more important than in summer daylight. Although we’ve all seen riders with hardly a reflector, I ride with 3 red lights behind: 2 solid on my belt and a strobe under my saddle. My friend has a suit with lights up and down the arms resembling Landing Signal Officer on an aircraft carrier. But, by gosh he’s visible. Careful, it’s a jungle out there.

Frozen Shoulder
In the office this is known as Adhesive Capsulitis. The patient is usually not aware of trauma (although a percentage of this group has has recent trauma or surgery to this shoulder) but notices an ever increasing loss of motion, a “capsulitis” or shrinking/tightening of the capsule around the shoulder joint. For some reason, it’s much more common in women than men, non-dominant shoulder, aged 35-55. Diabetes seems to increase the risk of developing FS. This is not arthritis or infection although its true cause is not known.

Conveniently, the natural history of the disease can be divided in the freezing phase commonly lasting 4-6 months, the frozen phase lasting 4-6 months and finally the thawing phase lasting the same. The initial phase is characterized by gradual loss of motion (can’t put hand overhead, fasten bra behind back, get wallet out of pocket and so forth) and pain. Once the “freezing” has slowed, there’s also less pain. During the following “frozen period, motion is limited but so is pain. Subsequently, when the process begins to retreat, the pain recurs to a degree.

Treatment is mostly supportive with a small role for Physical Therapy, pain control, and a program to try to maintain motion. Patience is a must. A percentage of these folks don’t have a return of motion and may be a candidate for what’s known as a manipulation under anesthesia or an arthroscopy to release adhesions inside the joint.

Overall, this is usually a self limited process, hopefully more of an inconvenience than a disability.

Heal That Fracture in a Jif