These guys have no elbows. For the inaugural Ironman race on Oahu in 1978, Navy Commander John Collins made the winners trophy in his basement. It became known as the “Hole in the Head” for a couple obvious reasons, among them it’s appearance and, perhaps describing anyone who’d do the 140.6 miles! 8″ miniatures were given to each finisher of the 25th Anniversary Ironman in 2003. A cool thing to do for sure. 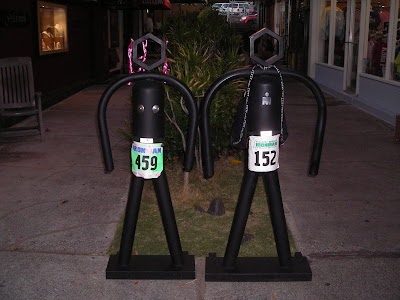 I was recently asked about tendinitis over the inside or medial aspect of the elbow. In Orthopedic circles this is known as Golfer’s (swimmer’s)Elbow.

Golfers elbow – or medial epicondylitis – is pain at/near the muscle origin over the inside of the elbow. Sort of like tennis elbow but on the opposite side of the elbow and less frequent. It seems to occur in men more than women, dominant over non-dominant arm. Although pain is the predominant complaint, people will sometimes note forearm or hand weakness, numbness radiating into the hand, usually little finger and ring like when you hit your funny bone. I’ve had some folks complain of a just plain stiff elbow.

You’d like to know why you “got” it. Was it overuse or repetition of placing the elbow in an overloaded state or was it a single forceful episode that over taxed the muscular origin? The diagnosis is usually made by your story and findings on physical exam. Often x-rays are obtained to look for arthritis, missed trauma, etc. Very rarely will someone think about an MRI.

Failure of the above, in my office, gets a corticosteroid injection as they just seem to work. Maybe even two, over time. Here the literature gets a little cloudy. As has been noted here before, Orthopedic Surgeons (and I’m one of them) are quick to jump on a passing bandwagon. PRP is basically your own blood placed in a centrifuge. The clear part, or plasma, is where this high concentration of platelets is extracted and subsequently injected in the area of chronic tendinopathy. It makes sense. But it’s still new enough that there are few long term studies on which we can base treatment on science, not intuition. A NY Times editorial earlier this year quoted two studies where it had been injected in elbows – one helped more than standard treatment, one didn’t. Also, and this is important, many insurers will not pay for it. And it can get right expensive! So, the jury is still out on PRP but I think, ultimately it will have a role. But not as first line treatment. We just don’t know what that role is. Yet.

Very occasionally a surgical procedure will be needed but in most people’s hands, only after failure of an extensive conservative effort.