Hematuria, blood in the urine 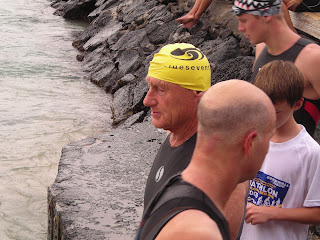 “Oh yeah, life goes on, long after the thrill of livin’ is gone.”  John Cougar Mellencamp

But Lew Hollander, yellow cap, would say you’re way wrong.  At age 81, he finished his 22nd  Ironman in Kona this year.  He says it’s how he “tests” himself.  Hard to have higher personal standards than Lew, a role model to us all.  He also makes many older triathletes jealous as he’s basically able to do this with only a modicum of injuries, often the rate limiting step to continued performance, particularly as we age.

Ever stood astride the commode after your long run, and instead of the usual concentrated deep yellow urine, you see blood?  Yep, it can be quite a shock.  But, like most things, if you take the time to do a little research you can narrow the list of possibilities…and cancel the call to the funeral home.

In medical jargon bloody urine is known as hematuria.  It can range from very slightly blood tinged all the way to frankly bloody.  It’s not a diagnosis, it’s a symptom.  But a symptom of what?  Let’s follow a local Charlottesville runner, aged 22, runs 60 – 100 miles per week, is professionally coached and works in the local running shoe store.  He obviously has a handle on correct foot wear.  He started with a very slight pinkish tinge to his urine after his longest runs but over time has developed frank hematuria.

So, the first place we look is to a phenomenon called “Runner’s Bladder” as it’s both the most common as well as the most benign.  It’s described  as bladder wall trauma, bruising, which leads to a small amount of blood in the urine.  When the runner decreases running volume or takes a couple of days off, it goes away.  For a while that is, until long runs resume.  It’s said that running with a partially full bladder can eliminate this problem but it’s a level of discomfort many can’t stand.  Every heel strike reminds one of the urine’s presence.

A visit to the Urologist by our runner reveals that although the mostly likely diagnosis is Runner’s Bladder, the list of possibilities including kidney stones, tumor, infection, various kidney problems, etc., is pretty long.  So, to solidify the diagnosis, the Urologist plans to perform a cystoscopy – an in office procedure in which he will insert a small fiber optic scope through this runners penis up into the bladder. (“You’re going to put a what into my where?”the runner was heard to exclaim!)  In the past, predominantly because of the larger size of the scope and the pain it would cause, this type of procedure was done in the Operating Room under anesthesia.

Good news.  During cystoscopy, our athlete’s bladder wall revealed generous bruising and no other obvious source of bleeding.  So for now, he’ll continue his running career, and his hematuria knowing that he’s not causing irreversible long term damage.  Maybe he’ll try again to learn to run with his bladder half full.  But he’s 22 with a head full of steam.

Precision vs Accuracy: A case for common sense plus Kona tips for 2012 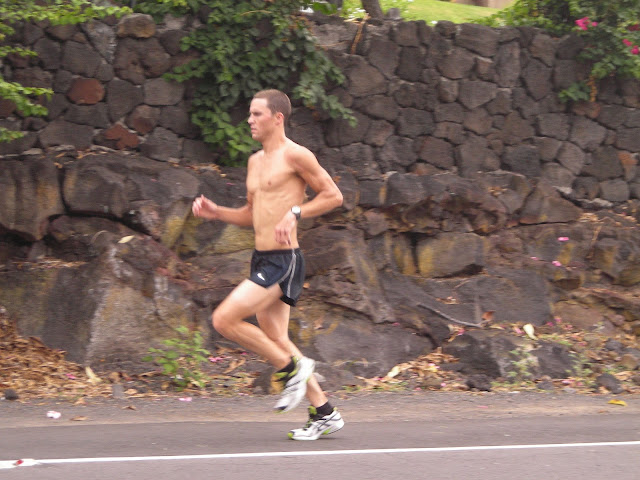