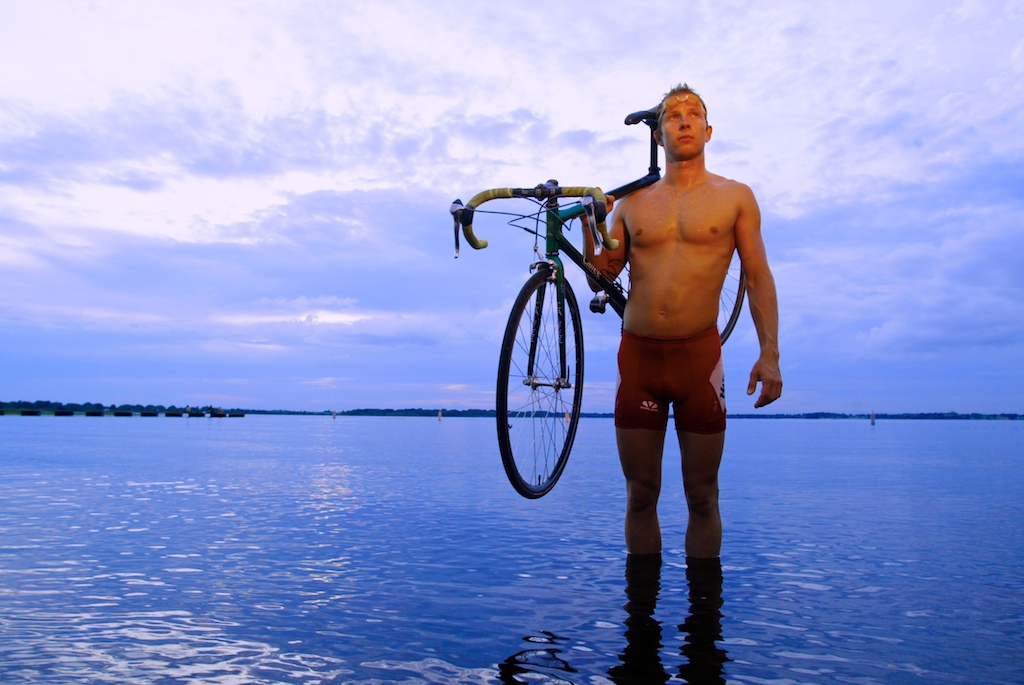 Report:
The athlete hydrated every 10-15 minutes averaging 30 oz of fluid an hour totaling 75 oz on the bike portion.
Took in about 480 calories an hour (288 from liquid, 192 from gels).
Total sodium intake per hour was 1160 mg (1080 mg from liquid and 80 mg from gels).
Lower average watts for bike portion and felt like some energy was needed to be saved in order to finish the run.
Athlete reported to have brown urine color with a bad odor at the end of the race – meaning he was severely dehydrated.

Initial first step is to determine what the athlete’s sweat rate is. The athlete did this in race like weather conditions with a 120 minute run. A nude body weight was taken prior to exercise and again after exercise (and after being wiped down dry with a towel). Convert the weight lost into ounces (1 lb = 16 oz). The athlete drank 80 oz of water during exercise and consumed 2 bags of chews totaling 120 g. Then add back the amount of liquid consumed with the total lost. Divide this number by the hours he exercised and notice his sweat rate is 96 fl oz/hour (~6 lbs an hour) or ~2.8 L/hr.

During the sweat test you can tell he was 5% dehydrated when he finished which is not good. Your performance decreases significantly at 2% dehydration (~4 lbs an hour for this athlete). Another problem noticed in this sweat test was that there was not enough electrolytes or carbohydrates consumed during exercise. The electrolytes will help maintain your fluid balance, increase your thirst mechanism to encourage hydration, and will help you optimally perform. The carbohydrates will help fuel you through the work out, also allow you to attain better training adaptations. Another aspect to keep in mind is that recovery can improve with proper hydration and fueling.

Sports drinks (ideally 3-6% carbohydrate beverage with 2:1 ratio blend of sugars, no protein) will need to be consumed since this subject has such a high sweat rate and energy needs. Plus they will help provide electrolytes to aid in maintaining hydration. Since the athlete is a heavy sweater, extra electrolyte supplementation may be needed. Typically when losing 2 Liters plus per hour you are losing a lot of salt as well (~1500-1700 mg).

This athlete should focus on about 320-350 calories an hour for a half ironman or full ironman distance race. This needs to be trialed in brick workouts. If he were to add gels, he would need to make sure that he doesn’t add too many carbohydrates because that can lead to stomach distress (caused by slow gastric emptying).

The target for fuel should be 75-80 g of carbohydrates an hour. Typically endurance athletes will oxidize or utilize that much per hour with the highest being recorded over 90 g per hour (rare to oxidize at the highest amounts).

This wasn’t a pure scientific test, but a good quick and dirty method to fine tune nutrition and hydration plans to help this athlete race at his best in the future. These are merely suggestions to start at, and tweaks may be needed.

Another reminder: the days leading up to your race that your nutrition and hydration is just as important and can play a role on your race day performance. As this could have played a role in this case. Never start a workout or race dehydrated.

~Analysis conducted by Nick Suffredin, formerly a scientist at the Gatorade Sports Science Institute where he worked on testing elite professional athletes to enhance their hydration practices and nutrition intake to improve their performance. He has been part of human performance and sports nutrition advisory boards. Currently provides endurance and nutrition coaching as well as consulting. He enjoys spending time with his wife Melanie and daughter Makayla. For coaching and nutrition inquiries Nick can be contacted at: [email protected]