As we mentioned last week on the blog, we hope you’ve been enjoying the FINA Swimming World Championships from Shanghai. (If the championships haven’t been shown on TV in your country you’ll find most races on YouTube)

It would be easy to watch Sun’s performance and assume that everyone should aim to swim using this style but in the women’s race Lotte Friis from Denmark put in a fantastic winning performance, finishing just 7 seconds off Kate Zieglers’s world record. Lotte’s stroke has a completely different style from Sun’s, using a straight arm recovery with a much shorter faster stroke. In direct comparison to Sun, Lotte took 43 strokes per 50m at 88 strokes per minute. Still very tall at 1.84m (6’0″), Lotte has chosen and refined a style that works superbly well for her and it might well be best for you too. You can watch her race here. (Incidentally, Kate Zeigler also used this stroke technique, we call it the Swinger style and it’s used by most elite open water swimmers and triathletes)

Let’s analyse these two great performances and draw some important conclusions for your own swimming:

Sun has an amazingly long stroke, perhaps the longest we’ve ever seen in the elite swimming world. It looks like he’s *gliding* down the pool but be very careful – it’s almost entirely an illusion due to the sheer length of his stroke. Here’s some consecutive frames from his video, 0.04 seconds apart:

The gap between one stroke finishing at the rear and the next starting at the front is less than 0.2 of a second – less than a blink of an eye! The truth is he’s hardly gliding at all – to Sun as he swims his strokes will feel very continuous from one side to the other. The same is true for Grant Hackett (the previous world record holder) – we measured the gap between his strokes as 0.15 seconds.

Although these tall smooth swimmers look like they pause in their stroke and glide down the pool, we can see from the frames above that they don’t. What we perceive when we see this footage at full speed is quite different from the reality. Sun has an extremely long stroke by virtue of his huge wingspan and efficient propulsive technique, this long style creates the perception that he is gliding when in fact there’s only a tiny fraction of a second between strokes.

The Swim Smooth team here in Perth perform thousands of sets of video analysis on swimmers every year. If you are a bit of an Overglider and have tried to lengthen things out by adding an active glide to your stroke, we can tell you from experience that your deadspot will be in the range of 0.6 to 1.2 seconds. This means you’ll be decelerating on every stroke which is losing you a lot of efficiency as you have to re-accelerate on the next stroke. This deadspot between strokes is the key difference between a Smooth Swim Type (of which Sun is a classic example) and an Overglider – other than the fact that a Smooth swims more than twice as quickly of course!

Overgliders need to work on the fluidity and timing of their catch to remove the deadspot in their stroke and so become more efficient. Find out how in our Overglider Swim Type Guide here.

As you’d expect with her faster stroke rate style, Lotte Friis has no gap between propulsion phases at all, starting her stroke at the front just as the stroke is finishing at the back: 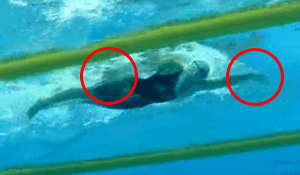 This continuous propulsion is what makes the Swinger stroke style so dominant in open water, there’s not even a tiny gap in propulsion to become stalled by wake or chop from other swimmers. Although this style can look like hard work, it isn’t when you get it right and if it suits your physiology. It’s a bit like spinning a smaller gear on the bike – she takes more strokes but each stroke is less effort. You could say she’s Lance Armstrong to Sun’s Jan Ullrich.

If you’re looking to lift your stroke rate remember it’s not a matter of shortening your stroke: we can see from the frame above that Lotte’s still finishing the stroke by her hip and not shortening it at all. Instead, the key is to get into your catch at the front just a little sooner by keeping that lead hand in motion, either extending forwards, tipping over or pressing backwards. Never stopping and actively gliding.

The stroke timing of Sun’s and Lotte’s stroke is also worth examining. They both use ‘front-quadrant timing’ which is swimming jargon for the hands passing in front of the head: 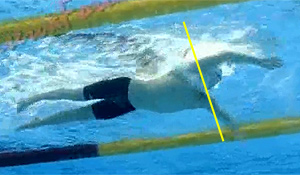 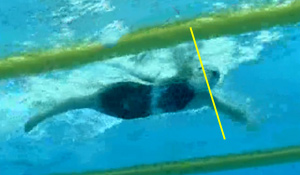 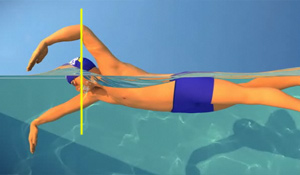 his is important as it helps keep the stroke long and gives you support when you go to breathe because the lead arm is out in front of you. If your lead arm collapses down then your hands will pass behind your head and will offer you no support to breath, as we can see with this classic Bambino swimmer: 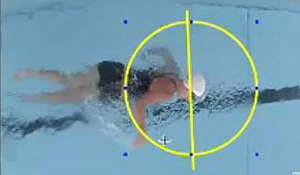 If you take on water when you breathe, try improving your stroke timing to always have one hand in front of your head at all times. Try repeating the mantra ‘one-two-stretch’ as you swim where the ‘one’ and ‘two’ are on a normal stroke and the ‘stretch’ is on the breathing stroke. This will help you focus on keeping that lead hand out in front of you for support as you breathe, making things feel much more comfortable:

Even though Sun has a very long stroke, he doesn’t catch-up with his hand in front of his head as many Overgliders do. This is critical, a full catch-up style stroke is slow and inefficient because of the very long gap between strokes. Here is such an Overglider, swimming around 2:20 per 100m pace. We measured the gap between his strokes during video analysis as 1.0 seconds, so long he nearly comes to a halt between strokes when he swims: 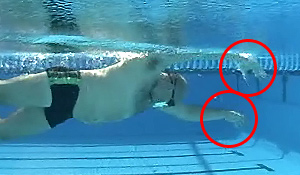 Both Sun and Lotte tip their wrist at the front of the stroke as they initiate the catch prior to bending and maintaining a high elbow, just as we animated Mr Smooth to do. When watching video clips at full speed this is easy to miss but it’s a key to you initiating a good catch in your own stroke: 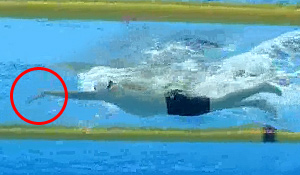 Remember you’re looking for a light rhythmical feeling to the catch at this point, it’s not a solid feeling until underneath your body during the pull phase. It’s quite likely in your stroke that you over-power things here in front of your head. Even though Sun and Lotte are swimming at maximum effort they’re still keeping their catch light and rhythmical. Find out how to develop a great catch yourself in our Catch Masterclass DVD by clicking here.