Click here to grab our newsletter jam-packed with free triathlon training tips and tricks!
Will Varicose Veins Slow You Down? 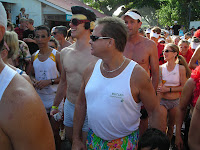 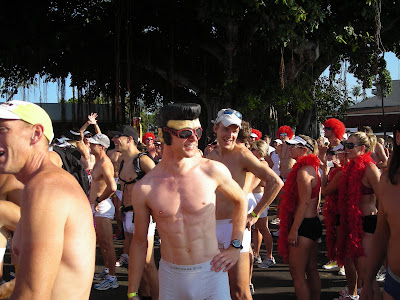 I don’t want to work, I want to bang on the drum all day.
Todd
Rundgren

So you’ve got some vein concerns, eh? Well, they’re pretty
common. Although some folks seem more prone than others, half
of all adults over 50 will have them to some degree. “Very close veins” as some
of my patients call them occur as small “spider veins” or the larger “varicose
veins.” We know that blood in veins only goes one way, back to the heart, but
when the little flaps of tissue known as valves, inside the veins, fail they can
become enlarged, twisted, swollen and occasionally purple or blue. In the
advanced stages they can lead to skin breakdown and infection but early on it’s
more of an appearance issue. Some folks might complain of an aching pain in
their legs, legs becoming easily tired, swelling, darkening of the skin, and
even itching or a rash.

In their most advanced stages, VV can lead to
blood clots in the deep veins of the leg, always a bad thing as they’ll
sometimes break off, travel to the lungs, and not infrequently lead to
death.

So what do we do? Things that have been shown to help include
sunscreen, regular exercise (presumably not an issue in you), weight control,
elimination of constricting clothing on legs, groin or waist, support stockings
and elevating your legs when you sit. Some choose sclerotherapy, or injection of
the veins which can significantly reduce or eliminate the smaller ones. Laser
therapy is used in a similar fashion as well being placed inside the vein to
shrink it. This is especially effective in the deeper veins. It’s done in the
doctors office under local anesthesia.

Lastly, ligation (tying off) and
stripping (pulling out) in an operating room can be performed for the more
involved problems. It’s still performed frequently.

In short, most
people don’t need to do much about them…but complain…but if you need to,
there are docs who specialize in vein issues who can evaluate you, define the
severity of the problem and give you alternatives that are right for you