Sometimes coaches and athletes have different ideas about what makes for a great workout. As a coach, the easiest part of my job is posting a workout. As an athlete, the easiest part of your job should be doing them. Sure, some workouts are really, really tough and some intervals might make you want to puke. But the easy part I’m talking about is completing them according to a plan.

Here’s the recipe for completing the perfect workout.

END_OF_DOCUMENT_TOKEN_TO_BE_REPLACED

Tonight Ben & Kerry will be talking about what you need to know as a beginner when
it comes to open water swimming.

Often then swim in a triathlon can be the most scary and stressful for a beginner.
Ben & Kerry are going to tell you all you need to know in order to be ready for your
next open water swimming experience.

The call kicks off at 9EST 6PST. To get your questions answered enter them in the box
below.

END_OF_DOCUMENT_TOKEN_TO_BE_REPLACED 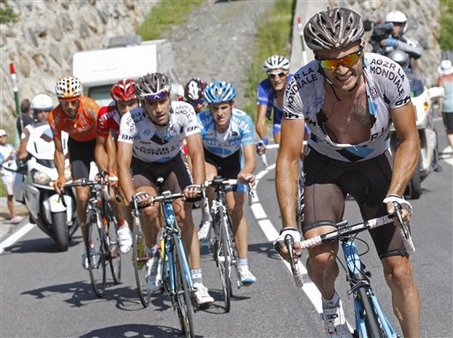 Hills can be daunting to anyone…

…but if you know how to prepare for them and what techniques to use to climb them you can become a mountain ram.

Ben & Kerry will talking about how you can develop the skills and motor to climb at your best. Being strong on hills can be an excellent advantage when racing and can provide a great way for you to drop the competition.

To listen now or download for later, just keep reading!

END_OF_DOCUMENT_TOKEN_TO_BE_REPLACED

Swimming in the open water intimidates many triathletes. Like anything else, it is a skill that can be developed, and over time it can become a very enjoyable experience.

In this call, Ben & Kerry will sharing with you all you need to know on swimming in the open water and how to make it easier and more efficient – they’ll discuss cold water, buoy turns, drafting, sighting, goggle tips, swim cap tips, wetsuit tips and more.

To listen now or download for later, keep reading!
END_OF_DOCUMENT_TOKEN_TO_BE_REPLACED

Jessi Stensland will be joining Rock Star Triathlete tonight to do some Q&A.

In 2000, Jessi entered the professional circuit. A strong swimmer who quickly developed strength on the bike, she hit the ground running. Her first professional win came in 2001 on one of the toughest bike courses on the circuit, at the St. Kitts International Triathlon. Since then Jessi has had 20 career wins both nationally and internationally. In 2004 she won the Half Ironman Mexico, her first attempt at that distance. The highlight of her career however was the Olympic journey which culmintated with the 2004 US Olympic Triathlon Trials where she finished 4th and 6th among the American women.

Early in 2008 Jessi resumed training and racing. Partnered with powerhouse Under Armour through 2010, the focus this time around is broader, as the tag line of this website implies. It will be an adventure in all things endurance, both on and off-road, and all (reasonable) distances.

Jessi attributes her desire to race again at an elite level and her ability to do so injury-free to the team at Athletes’ Performance and the Core Performance program. An understanding of body awareness, being athletic, and how to integrate all elements of performance into life is a message that Jessi is committed to passing along.

Power meters are vital if you want to take your cycling and overall triathlon performance to the next level. Choosing which power meter is right for you is also important as it can be an expensive investment.

Ben & Kerry will be telling you all you need to know about choosing the right power meter for you.

END_OF_DOCUMENT_TOKEN_TO_BE_REPLACED The world of nutrition is one of the most complex and most controversial subjects. I have lost count of the number of manufacturers producing energy drinks, electrolyte replacement drinks, gels, bars, and any number of other variations that have appeared in the last 12 years.

All manufacturers claim that their products are the best for various reasons—but who is actually right?

I have never backed a brand of energy drink purely because I get the same effect from a large percentage of them, and because some are absolutely horrid. However, my experiences don’t mean that yours will be the same; I have had upset stomachs, nausea and vomiting while riding my bike with some of the stuff.

The latest one I tried gave me a headache that felt like I had gotten myself quite intoxicated the night before! That happened not just once, but three times, each after rides following the same route, riding the same intensity at set stages BUT changing the mix from 100%—as indicated on the container, to 60% of the recommended mix.

For any person to say that their drink is the best in the world for you must be someone who knows every single little thing about each athlete; their sleeping & eating patterns, work, family and social responsibilities and stresses, and how their bodies function with certain foods all rolled into one. It ain’t happening is it? END_OF_DOCUMENT_TOKEN_TO_BE_REPLACED

Functional exercises are essentially movements that follow the movement patterns used in sport—they don’t work muscles in isolation. These typical articles predominantly look at exercises that involve the legs such as dead lifts, squats, split squats, one legged squats, and so on. END_OF_DOCUMENT_TOKEN_TO_BE_REPLACED So the saying goes, “If it isn’t measured than it can not be improved.” Thus the use of a clock in swimming is vital. There aren’t a whole lot of other swimming tools out there to use to measure how well your swimming other than the swim clock.

In this session Ben & Kerry will be talking about how to use the swim clock at the pool to make your session efficient and effective.

To ask your questions or listen in, keep reading…

END_OF_DOCUMENT_TOKEN_TO_BE_REPLACED There is a ton of different gear out there that companies claim can make swimmers faster. But how do you know which tools are the best?

Kerry will be discussing his favorite tools to utilize to help triathletes get faster.